A Look at HHH Enrollment Trends

A Look at HHH Enrollment Trends

Fifteen to twenty years ago, Half Hollow Hills was dotted with big parcels of undeveloped land. In the late 90s and early 2000s, we saw a population explosion as 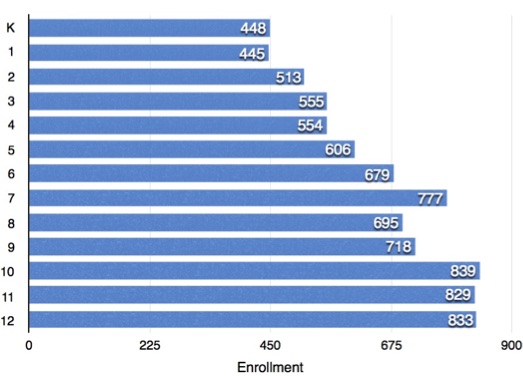 those parcels were bought up, developed, and brought an influx of students into the district. I believe this increase was sustained a few years beyond its natural life as consumer confidence and junk mortgages convinced homebuyers to go for their stretch home before the market collapsed.

During that period, most (70% of our active members were hired after Jan. 1, 2001) of us were hired to meet the needs of the enrollment increase. Construction expanded our schools, and additional staff was needed to fill the “bell” shown to the left. In the last several years, however, we’ve been charged with managing the impact the loss of students has on staff. That impact is exacerbated by the presence of a tax cap, which sometimes forces districts to make less practical staffing decisions.

Prior to the Cap, it was less likely that a district would do something like split or downsize (via excessing and recall) a FT teacher to a .8, for example, because it lost a section. It would have been easier for everyone involved and better for program just to run classes smaller or add a new elective. Staffing today is a full-court press that starts as early as January. It’s a process we stay actively involved in, in the hopes that we can help identify solutions to personal and professional problems that can occur when sections and FTEs are only numbers.

Although we can not make staffing decisions ourselves, we work collaboratively with the District to explore new programs, class sizes and opportunities members may find in other tenure areas. Again, these are increasingly difficult when the Cap restricts revenue. We also developed the Job Share program placed in our last contract and proposed a retirement incentive this year in the hopes that these may also serve as tools in our arsenal for combatting enrollment decline. When none of those things work, we do everything we can to help members land on their feet elsewhere on the Island.

This process is a constant challenge, and one that will be with us for the next few years as the decline makes its way through the upper grades. It can get better or worse as budgeting dictates. If, for example, our President-Elect’s call for $110B state support for expanding charter schools materializes, it may siphon off enough state aid to make sustainability an even bigger challenge for local municipalities and school districts. We remain committed to working diligently and closely with members and the District throughout the coming years. Make sure you do your part, too… Every year we lobby for state aid. Every year we make phone calls to ensure ensure our budget gets passed. You can be sure we’ll meet any attempt to defund our schools with fierce resistance. We can’t stop everything, and the enrollment decline itself is a force out of our control, but together - each doing his or her part - we do have the power to make a difference.